citizen of the world

I have always considered myself to be a citizen of the world. Although I was born in the Netherlands, I feel closely connected to people from other cultures, particularly Muslims and cultural minorities in the Middle-East area. For me, culture is separate from religion. I feel especially at home with the Mediterranean way of life, its expressiveness, its kindness and warmth. I studied Turkish part-time in Istanbul and I lived and worked there for some periods of the year between 2005 and 2011. This allowed me to experience Turkish culture at first hand. The experiences I gained there enabled me to take my work to a new level. This applies in particular to coaching and the training courses on diversity that I give in the Netherlands and abroad. As a child I already viewed the world through different – non-Dutch – eyes. I also use the same approach when I encounter other cultures.

In my vision, diversity means: bringing cultures – and people – together. The focus for me is on this connection. To this end, it is important to establish interaction between people. Among other ways, this can be done in the training courses I provide. When we look for the binding element together, our differences no longer seem so great. Exchange bolsters understanding and by becoming acquainted with one others cultures, in a non-judging manner, we can establish a connection and raise awareness. This awareness can be achieved by the trainings and masterclasses as well as through coaching, peer review or mentoring.

The Netherlands and the composition of its population has changed rapidly over the course of the past fifteen years. The Netherlands now has, for example, one million Muslims, a new group of potential employees. Not all companies have responded equally well to the recent demographic changes. ‘This masterclass is aimed at both multicultural high potentials and the business community. In practice, it appears that among innovative employers and this talented group there is a need for drawing the best out of one another. ‘Muslims in company’ provides insight into the tensions of diversity and responds to current social developments. In this way, companies and high potentials can react more easily to the rapidly changing market.

masterclass: the power of non-identity

In this unconventional and interactive masterclass you will experience themes of identity and non-identity, with a special focus on diversity. We might break stereotype thinking, but then the question remains: Is the concept of diversity in another country for instance in Turkey the same as it is in Europe? Having an identity is one thing, but growing to an awareness of non-identity is another thing. We will invite you to experience how a shift in thinking can create a totally different view of looking at your ‘self’ and to world issues. Surprise yourself with this out-of-the-box thinking masterclass; it might bring you things that you would never have dreamed of. Brochure in English upon request, see frame on the left side. 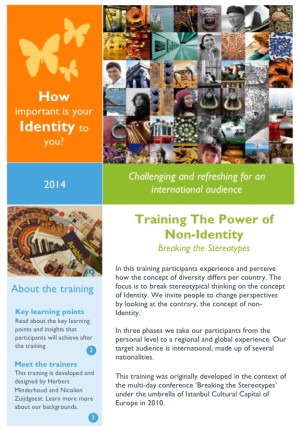